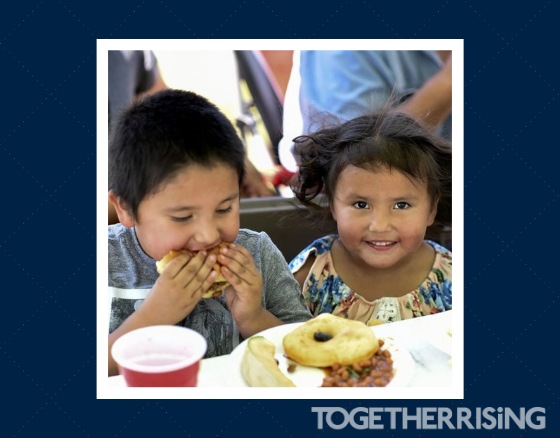 Today, Together Rising remembers what the commemoration of this day represents for our nation’s Indigenous peoples: theft of ancestral lands; biological warfare (intentionally distributing blankets contaminated with smallpox); and massacres that amount to genocide.

Between Columbus’s arrival to 400 years later, the Indigenous population in North America plummeted from up to 15 Million to fewer than 238,000.

In the last 18 months, Together Rising has invested $468,000 in the Oglala Lakota peoples of The Pine Ridge Reservation.

The Oglala Lakota people struggle to survive every winter. Temperatures on the Reservation drop to 40 degrees below zero. Heat comes from wood stoves. They do not have enough firewood. Kids have reported suicide attempts as an effort to end the struggle against the cold. Pervasive poverty forces an impossible choice: whether to keep their children warm, or keep their children fed.

Your investment -- deployed though One Spirit, a non-profit primarily run by Indigenous people -- has gone to cover: heating costs; employment of Indigenous women and men to cut, split & distribute the wood for the community; and a storage facility to maintain and protect wood reserves. You have also established and fully stocked Food Centers, managed and staffed by Indigenous people. You stepped in with emergency relief during this year’s devastating floods.

Your funds are focused on sustainability and self-sufficiency – employing Oglala Lakota people to build, manage, and lead the food market, Buffalo house, and greenhouse expansion – which will feed, and become an economic engine for, the people.

Today, we remember and mourn the truth, we honor the relentless resolve of Indigenous peoples, and we thank you for supporting Together Rising.