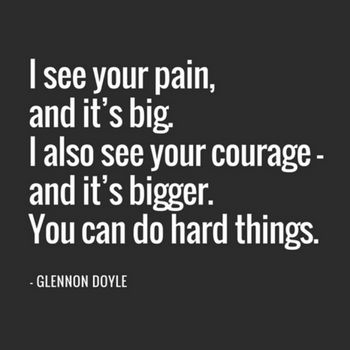 We want to tell you about a warrior named Jen.
Cindy wrote to us about Jen. Jen started out as the beloved teacher of Cindy’s daughter, and became a cherished friend. Cindy writes: “Jen has always been a hero of mine simply as my daughter’s teacher. I’m a single mom and a middle school teacher who adopted two little girls from China. My oldest had major attachment issues and high fear and anxiety at school and once I talked with Jen, she was the teacher who changed my daughter’s world. That would be enough to make her my hero, but it’s simply the tip of the iceberg.”
Jen is a mother to two little boys, Jaxon and Jeren. When Jaxon was born, there were some minor health scares. Things worsened when a cold nearly took his life.  Many tests and X-rays later, Jen learned that Jaxon was missing genes on the X chromosome and had his airways were malformed so that he couldn’t breathe well through them, especially if he caught a cold. He also has ocular albinism and  impaired hearing. Jaxon’s little brother shares these conditions, and has endured 14 surgeries. Jen’s boys are the only known siblings in the nation with this genetic disorder.
In the face of this excruciating pain and pressure, Jen has been a warrior.  Jen — up much of the night with her boys because of their sleep apnea — often operates on two hours of sleep before making her 30-mile commute to teach her 28 beloved six-year olds.  Cindy wrote, “Jen’s journey with her sons is one that would make most adults lie down, scream ‘Uncle’ and give up on everything. Not Jen. She has continually focused her journey on what God is teaching her through it and on how huge of a blessing these boys have been in her world. You won’t find two happier boys. They love every ounce of every second of every day and live it to its fullest and I know the reason why is because Jen would never have it any other way.”
Through Together Rising, you sent Jen a $1,000 gift card to defray some of the family’s medical costs.  We are also sending Jen a giant virtual standing ovation for her relentless warrior love for her boys and her students, and her audacious courage to face each day with optimism, faith, and a commitment to making the world better.  Brava, Warrior Jen!
If you’d like to donate to the healing, uplifting work of Together Rising, please go to: https://togetherrising.org/give/.
Posted in Blog Posts