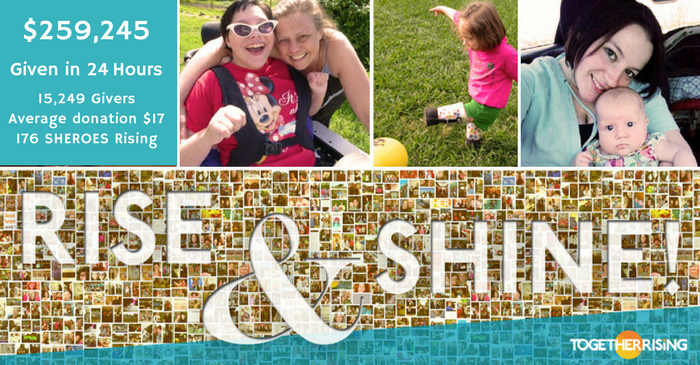 Rise & Shine Love Flash Mob was held in May 2015. We lifted up 176 warriors and their families—all individuals who were nominated as “everyday heroes” from within the Together Rising community. Every single application we received described someone lighting up her community or family or world, so the Together Rising board decided that not a single one of them could be left out. Every single nominee received some love to help meet at least part of her needs—from a gift card to help ease a financial burden to fulfilling an entire request sent in by the person who nominated her. The goal was for every single hero to know that she is SEEN and LOVED, and our community met this goal by raising $259,245 in 24 hours. That number went up to $268,248.15 in 26 hours.  From this amazing outpouring of love, our community rallied together to: purchase running legs for a four-year-old named Ellie with a genetic disorder that caused her legs to need to be amputated and enabled a ten-year-old activist named Hailey to build 10 more homeless shelters.