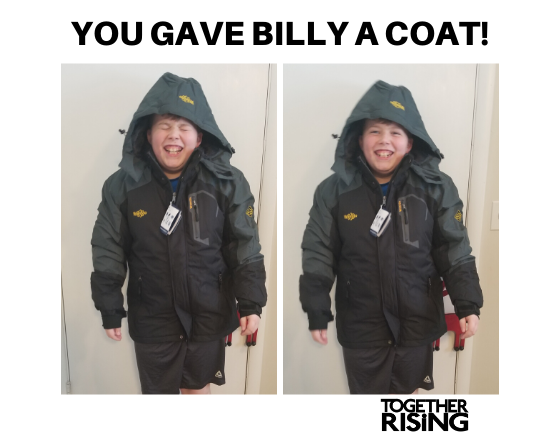 After being deployed in Kosovo with the US Army, Derrick returned home to his family, and he and his wife Teagan were finally able to buy their first home and start to put down roots. They were loving settling in and being together again. But then their home's property value was reassessed, causing their mortgage payment to increase without warning. They did not learn that they had fallen behind on mortgage payments until three months had passed -- and they spent every penny they had to catch up.

So when their oldest son, Billy, needed a coat for the New York winter, they were unable to buy one. You stepped in - through Together Rising -- and gave Billy a coat! Since Billy had outgrown his bed, you also provided bunk beds for Billy and his little brother Wes.

After your gifts were delivered, Teagan wrote us a note to say that  she had just stepped in to check on the boys and found them snuggled together in Wes’s lower bunk. Thank you for standing in the gap for this family, and proving again that we belong to each other, and that there’s no such thing as other people’s children.

Team Love -- our group of devoted monthly givers (of $5 and up!) -- make it possible for us to act quickly when we receive requests like this one from families like Billy’s who need a little extra.  We are so grateful for you! Every penny counts.

*Names have been changed.