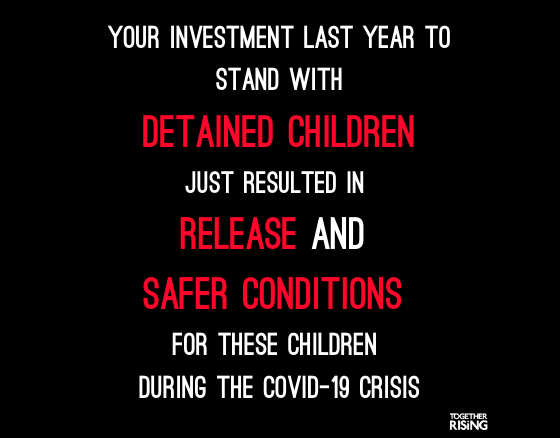 Last year, we asked you to show up for detained children. You - the people of the impossible - rushed to their aid and raised a record $2.6 million. We sent $900,000 to Holly Cooper and her team at UCDavis’s Law Immigration Clinic so that they could continue their life-saving work of advocating for the health, wellbeing and safety of these children.

Last week, Holly shared an update with us. After receiving your critical investment, the clinic continued to address the horrific family separation crisis by hiring two staff attorneys - Daisy and JJ - who have “empowered the team in ways they couldn’t have imagined.” With full staffing, the team was stronger than ever.

In ORR and ICE facilities across the country, thousands of children have been kept in overcrowded environments that make social distancing and proper sanitation practices impossible. These conditions are inhumane and dangerous, as they increase the likelihood that the children will be infected. Despite such high risk, the government continued to hold children unnecessarily with no end in sight. That is, until Holly, Daisy and JJ interceded.

Advocating fiercely for prompt releases and better conditions, the team worked to skillfully manage legal proceedings. They wouldn’t allow these babies to be forgotten.

Several weeks ago, after weeks of 18-hour days, a federal judge ruled in our team’s favor.

The judge stated that the FLORES settlement, an agreement by the government to maintain basic standards of care when detaining children, must be upheld during the pandemic. In her update, Holly shared that the judge adopted the team’s order to impose specific reporting requirements, emphasize the importance of oversight, and change practices that were delaying releases.

Now, children are being released, and those who can’t be released will be held in much safer conditions. These babies were remembered - and fought for. Our hearts are overwhelmed with appreciation and admiration.

Together Rising’s greatest honor is to build bridges, bringing together two amazing groups of warriors - people like you who want to help and people like Holly, Daisy and JJ who are doing boots-on-the-ground work. Sometimes the bridges we’re building are obvious, and other times we don’t realize their full impact until later. We had no idea ten months ago that we’d be facing a pandemic now. And yet, your incredible investment is still making an impact today.

In what can feel like an endless swirl of uncertainty, we know this to be true: Because of you, we will keep showing up for each other, these families, and these babies.